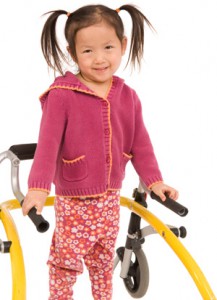 Cerebral palsy is just one of the conditions that we commonly treat at Chiltern Children’s Physiotherapy.
We cover:

We would be happy to discuss the concerns that you have for your child and how we can help.

The classification of the movement disorder reflects the areas of the brain that are damaged.

The four major classifications are:

Spastic hypertonus, or muscle stiffness makes moving the affected part difficult and slow. The degree of spasticity varies between children, and parts of the body that are affected. It can also vary with different activities that the child is undertaking. The terms spasticity, hypertonia and muscle stiffness are all used to describe this movement disorder. Hypertonia occurs as a result of damage to the motor cortex in the brain, this part of the brain controls movement.

Athetosis or Dyskinesia results in uncontrolled involuntary movements and fluctuations in muscle tone. The child may be too floppy (hypotonic) at one moment and quickly change to being too stiff (hypertonic). The degree of uncontrolled movement and fluctuations in muscle tone can vary between children. These children find it difficult to control their movement and find it difficult to stay still. Damage to the basal ganglia in the brain causes athetosis or dyskinesia. Hypotonia or floppiness is due to decreased muscle tone, which makes moving against gravity difficult for the child. The degree of hypotonia varies between children. Gaining head control, and the development of sitting and standing is delayed. Hypotonia may be part of a mixed pattern of Cerebral Palsy.

Ataxia makes it difficult to coordinate and plan movement which results in unsteady movements and difficulties with balance. The child may have a tremor which becomes more obvious when they are trying to perform an intentional movement like completing a jigsaw puzzle. Ataxia is caused by damage to the cerebellum. Their underlying muscle tone is usually slightly low.

Mixed presentation of Cerebral Palsy occur when a combination of some of the symptoms described above occur in one child. The severity and distribution of hypertonia, hypotonia, athetosis and ataxia varies between children.

The Classification of the Distribution of Cerebral Palsy is as follows:

The distribution of Cerebral Palsy is described as:

Total Body Involvement or Quadriplegia affects the whole body, the arms are usually more affected than the legs. One side of the body may be more severely affected than the other, this is called an asymmetrical presentation.

Hemiplegia affects one side of the body, for example right arm, trunk and leg.

Difficulties with communication may be associated with generalised learning difficulties; a specific language disorder; or be as a result of the motor impairment making it difficult to coordinate the muscles associated with speaking.

Visual difficulties in Cerebral Palsy may be caused by difficulty coordinating the muscles that control the movements of the eye; or may be due to disruption in the messages that the brain is receiving from the eyes, and how these messages are being interpreted.

Some children with Cerebral Palsy experience seizures, these can vary in severity from short ‘absences’ to ‘grand mal’ seizures. Medication may be required to control the seizures. If you are concerned that your child is experiencing seizures contact your child’s GP or Paediatrician for advice.

Children with Cerebral Palsy may have difficulties coordinating the muscles required to eat and drink safely. This can result in food or drink ‘going down the wrong way’. Gastro-Oesophageal reflux may also impact on a child’s feeding.

Some children with Cerebral Palsy have difficulty with processing and making sense of sensory information (such as touch) that they receive; and have difficulty organising an appropriate response.

Children with Cerebral Palsy may be emotionally labile, this is where their mood can change very rapidly and unexpectedly, for example, a child may suddenly start laughing for no apparent reason.

The Gross Motor Classification System (GMFCS) has been developed following an extensive research programme, involving a large cohort of children with Cerebral Palsy, conducted over at least 18 years. The GMFCS is a 5 level classification system that describes the level of gross motor function of children and youths with Cerebral Palsy. Many Health Professionals now use the GMFCS to assist with concisely describing the gross motor functions of a child with Cerebral Palsy at a particular point in time. However not all children fit neatly into one of the 5 levels; a child’s GMFCS level may change over time.

The Canchild website is a useful resource if you would like to read more about the GMFCS, it can be accessed via the following link: http://www.canchild.ca/en/measures/gmfcs.asp

The Gross Motor Function Classification System (GMFCS) is a 5 level classification system that describes the gross motor function of children and youth with cerebral palsy on the basis of their self-initiated movement with particular emphasis on sitting, walking, and wheeled mobility. Distinctions between levels are based on functional abilities, the need for assistive technology, including hand-held mobility devices (walkers, crutches, or canes) or wheeled mobility, and to a much lesser extent, quality of movement.

Children who have motor problems similar to those classified in “Level I” can generally walk without restrictions but tend to be limited in some of the more advanced motor skills. Children whose motor function has been classified at “Level V” are generally very limited in their ability to move themselves around even with the use of assistive technology.

These broadly indicate the functional abilities of children within each GMFCS level.  Some children’s skills don’t fit neatly into these levels.